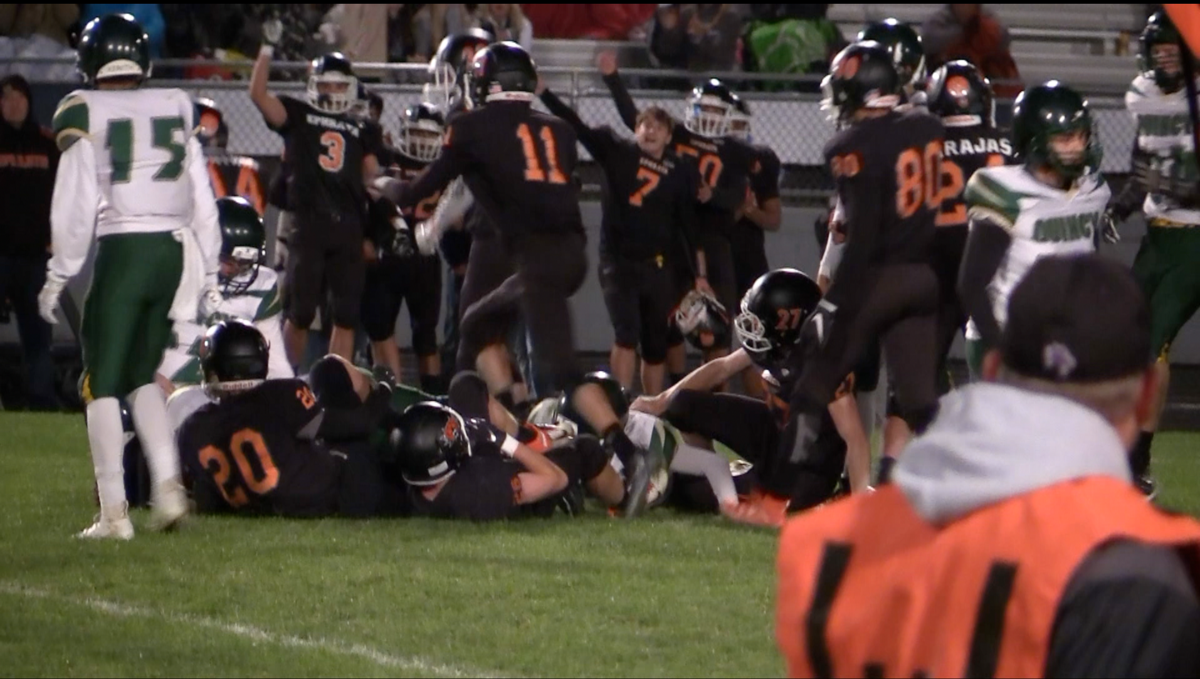 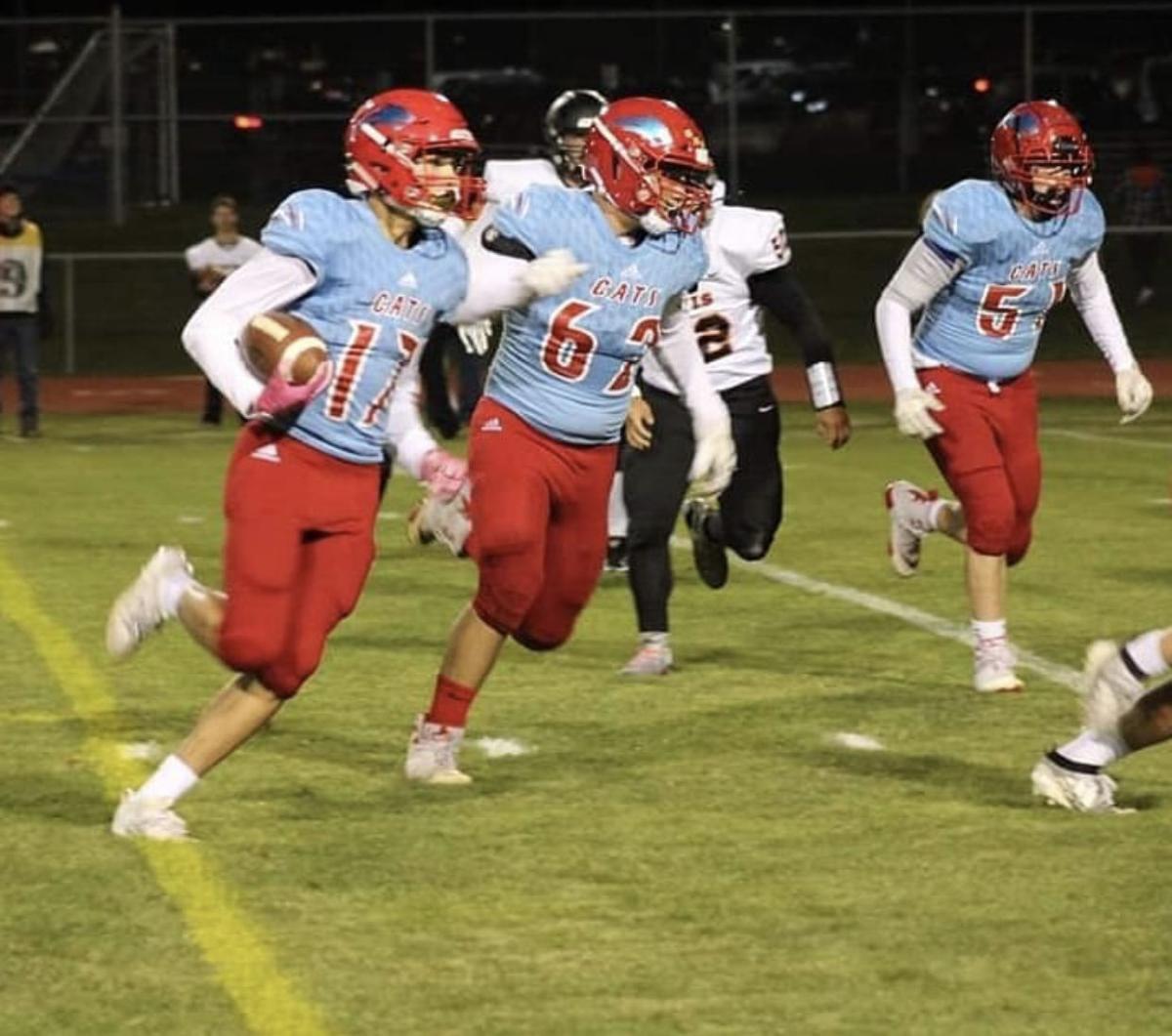 EASTMONT – Against Davis, the Eastmont Wildcats galloped out of the gate drawing first blood with a 10-yard Corbin Key touchdown run about three minutes into the 1st quarter. Eastmont would put its offensive prowess on display once again with a 55-yard run into the end zone by Austin Popoff, propelling the Wildcats to a 13 lead prior to a missed extra point. Davis would give the ball back to Eastmont on the ensuing drive after the team fumbled on its own 6-yard line. Carson Everhart decided to ‘take it in’ himself on a 1-yard touchdown seconds later. Eastmont literally ran away with the game on another 1st quarter score thanks to a 2-yard Austin Ruffins touchdown run. Prior to the end of the 1st half, Carson Talley and Austin Popoff would each score the last of two touchdowns on runs. A field goal by Eastmont’s kicked capped of the Wildcat scoring barrage putting the felines on top of Davis with a final score of 42-16. (4-2) Sunnyside will host undefeated Eastmont this Friday, kickoff is at 7 p.m.

MOSES LAKE – Another agonizing loss for Moses Lake. This week, the Chiefs fell to Eisenhower. Moses Lake only managed to score one touchdown which came in the 1st quarter on a 93-yard pass by Terrance Bryant. Eisenhower would score a pair of TDs by air and one on the ground. Eisenhower won the game 24-7. Winless Moses Lake may get its first win of the season when it hosts the (1-5) West valley Rams this Friday. Kickoff is at 7 p.m.

EPHRATA – The once winless Ephrata Tigers were able to ‘buck the trend’ seen so far this season after dominating the Quincy Jackrabbits last Friday. Momentum finally swung Ephrata’s way after a big Mac Baird run into the end zone for a 7-0 lead with a few seconds to go in the first quarter. Ephrata offense and defense ‘opened the throttle’ and both managed to score points throughout the game. Ephrata’s defense manhandled Quincy’s offense scoring points on a pick 6 and two safeties. The Tiger ‘D’ slowed Quincy’s offensive progress to a crawl shutting out the scoreless Jackrabbits. Tony O’ Neel toted the rock into the scoring zone in the 2nd quarter making the score 18-0 over the Jacks. A pick 6 accompanied by another Tony O’ Neel rushing touchdown and a Carter Cox touchdown put plenty of points on the board for a final score of 38-0. (1-5) Ephrata will host (2-4) Selah this Friday. Kickoff is at 7p.m.

OTHELLO – Othello’s Estevan Ochoa star-studded performance on the ground was the deciding element that made the Huskies winners last Friday night. Ochoa ran for 165 yards and four touchdowns against the East Valley Red Devils. Othello managed to put 20 unanswered points on the board before the half. The Red Devils showed signs of life on a 22-yard run by quarterback Aiden Esill and a 93-yard pass to Erik Navarro, but they weren’t lively enough. Othello won 35-13. (4-2) Othello will host Ellensburg this Friday. Game time is at 7 p.m.

SOAP LAKE – You would think Soap Lake’s 42 points on the scoreboard would have kept them in the game against Entiat last Friday, but that wasn’t so. The Entiat Tigers racked up nearly 700 yards of total offense against the Eagles. It was the highest scoring game all year in north central Washington with a final score of 86-42. Soap Lake’s defense was shredded by the Tigers’ passing attack. Entiat QB Colby Kretcher throw six touchdowns. Soap Lake (4-2) will by hosted by Liberty Bell (2-3) this Friday. Kickoff is at 7p.m.

MATTAWA – Offensive miscues were a problem for the Wahluke Warriors during their battle against River View last Friday. River View’s Tre Sakota outperformed Wahluke’s Oscar Nunez at quarterback that night. While Tre Sakota put up points on four touchdown strikes, Nunez had a lukewarm night in comparison with one touchdown and two interceptions. Wahluke also gave up the ball on a fumble deflating Wahluke’s momentum in the game. Wahluke lost 40-16. (2-4) Wahluke hopes to secure a stepping stone in getting back to .500 this week when it hosts (2-4) College Place. Kickoff is Friday at 7p.m.

ROYAL CITY – Connell struggled to keep Royal in check last Friday as the Knights marched on to achieve 428 yards of total offense in their 35-0 route of Eagles. Per usual, Royal put itself into scoring position many times throughout the night, however, turnovers were a factor for the team with a perfect record. Two lost fumbles showed that the seemingly indestructible Knights had a “chink in the armor.” Three touchdown passes and two touchdown runs helped wash away any concerns the Knights may have had on offense. The undefeated Knights will host the (5-1) Kiona Benton Bears this Friday. Kickoff is at 7p.m.

WARDEN – Warden’s three touchdowns thought the air kept the Cougs in the game, but the two interceptions may have cost them the win while playing College Place last weekend. The Hawks’ passing attack took flight in the first quarter with two tosses to the end zone. It appeared that the Cougars defense had grounded the air game but they couldn’t corral the Hawks on the ground as the birds scurried into the end zone on three rushing touchdowns. College Place was the victor, 36-22. Warden (3-3) will host Connell (3-3) in game that could get the Cougs back to above .500. Kickoff is Friday at 7p.m.

COULEE CITY – Almira-Coulee-Hartline’s running backs outmuscled Waterville-Mansfield on Friday. The Warriors would only pass once and the rush of the game was all running with three touchdowns scored by Brayton Schafer, the team’s workhorse. Other touchdown producers included Parker Roberts, Dane Isaak, Grady Murray and Logan Braaten. The Warriors won 68-16. The undefeated Warriors will take on (4-2) Wilbur Creston at home at Saturday.