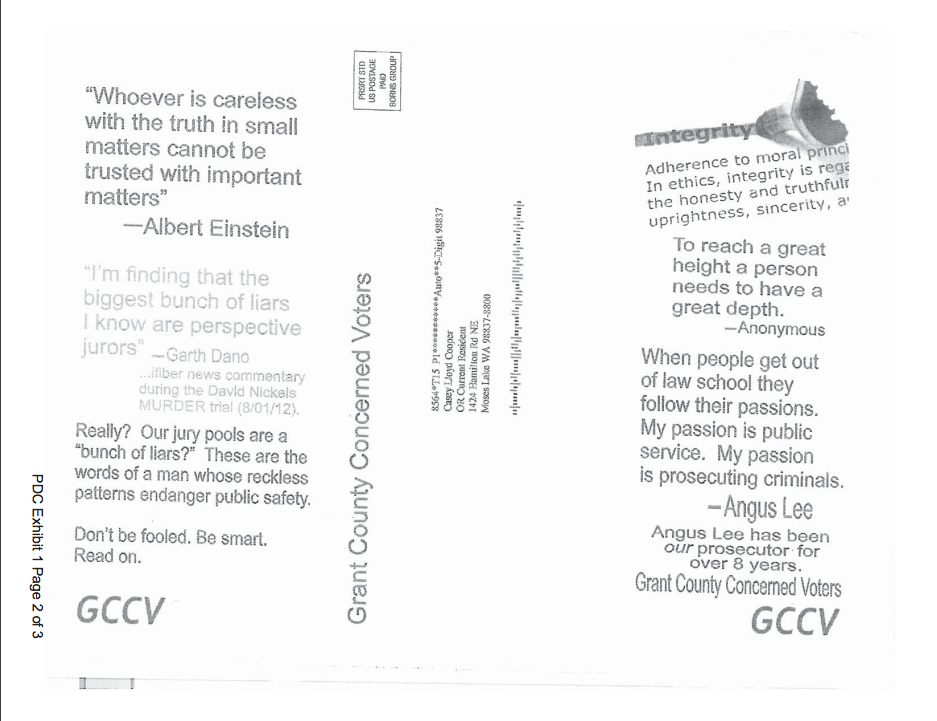 OLYMPIA - A Thurston County judge has ruled that a former Grant County Superior Court Judge and a Moses Lake business owner violated the state’s campaign finance law multiple times when they sent a 2014 mailer in the election for Grant County prosecutor, and concealed they were the source of the mailer.

The judge ruled Jerry Moberg and Ken Greene violated the law by concealing their sponsorship of a political mailer sent to voters and for failing to register and report as a political committee. The judge also ruled Greene unlawfully used an assumed name to identify the sponsor of an electioneering communication.

The state Public Disclosure Commission (PDC) referred the case to the Attorney General’s Office, which filed a lawsuit in 2017.

The judge’s ruling establishes that Moberg and Greene broke the law. The trial set for Feb. 24 will determine the penalty.

The state’s Attorney General’s Office plans to argue that Moberg and Greene intentionally concealed Moberg’s role in the mailer, and ask for the penalty for the violation to be tripled. The two could face penalties totaling up to about $319,000 plus costs and fees if the court agrees.

In early October, a mailer arrived at voters’ homes, endorsing Lee and attacking Dano’s character. The flyer identified “Grant County Concerned Voters” as the sponsor, but no such group was ever registered with the PDC or filed any reports, meaning no public information was available to determine who was behind the mailing and how much money was spent, according to the Attorney General’s Office.

The PDC received complaints about the flyer and launched an investigation, which uncovered email communications between Greene, Moberg and a South Dakota-based printer the two had worked with to send the 12,000 mailers. In September, Moberg approved the printer’s quote of $3,872.10 but told the company to send an invoice to Greene. Moberg wrote that Greene “will forward you a signed check for the amount due. Those funds will be available for withdrawal tomorrow by noon Pacific Standard Time.”

According to the PDC, at the time Moberg sent the email, bank records show Greene’s account balance was less than $100. On Oct. 1, Moberg wrote a check to himself from his law firm’s account, cashed the check and provide cash to Greene, who then deposited $4,000 into his bank account.

On the same day, Moberg sent an email to the printer with the scanned copy of the check to authorize payment for printing and mailing, and voters received the mailer about 10 days later.

When the PDC reached out to Greene in Sept. 2015, “Greene initially refused to disclose his or Moberg’s involvement with the Dano mailer. Instead, Greene demanded an explanation of how the PDC staff came to associate him with the Dano mailer,” the Thurston County judge stated.

Greene and Moberg later responded in writing through their attorney. In his ruling, the judge wrote, “Significantly, their January 22, 2016 letter to the PDC omitted Moberg’s role in providing the funds needed for the Dano mailer and instead represented that ‘Ken Greene was the sole decision-maker and financial contributor.’”

Later, the state deposed both Greene and Moberg in which the two repeated the claim under oath.

“While under oath, each defendant represented that no one other than Greene had any role in paying for the Dano mailer, and that Moberg, in particular, did not help pay for the mailer,” the judge wrote. “More than two months later, after the PDC had requested and obtained a copy of Greene’s bank statement, which showed that a $4,000 deposit had occurred on Oct. 1, 2013, defendants’ then counsel revealed to the PDC that Moberg was in fact the source of the funds used to pay for the Dano mailer.”

The judge ruled that Greene and Moberg and violated the state’s campaign finance laws in several ways, including:

The Attorney General’s Office will argue that concealing the violations was intentional, which under state law, can lead to tripled penalties if the court agrees.

“If you violate campaign finance laws and lie to the state about your conduct, you can expect to be held accountable to the fullest extent of the law,” Attorney General Bob Ferguson stated. “Dark money has no place in Washington elections.”