OLYMPIA – A proposed bill would phase out the use of studded tires in Washington by July of 2025.

Currently, tires with metal studs can be used from November through April for snow, ice and other conditions. Tires with retractable studs are allowed on the roadways year-round, the bill states.

A fee beginning in July of 2019 would be imposed on the sale of each new tire with studs, if House Bill 1309 passes. The proposed bill would increase the fee from $5 to $100, which is paid to the retailer when studded tires are purchased. As of right now, the retailer is allowed to keep 10 percent of the fee, or 50 cents. The bill proposes that retailers keep 1%, or $10 of the fee.

Any seller who refuses to collect the fee or any buyers who refuse to pay it are guilty of a misdemeanor, according to the bill.

Beginning January 1, 2020, the bill would required law enforcement to issue a traffic infraction for any person, firm, or corporation to sell or offer for sale a studded tire or a stud for installation in a tire.

Starting on July 1 of 2025, studded tires would not be permitted on public highways in the state of Washington. The Washington State Department of Transportation would have to change the traffic signage to no longer reference studded tires. Tires with retractable studs would be exempt.

“Engineering research indicates that tire studs damage hot mix asphalt and concrete pavements, wearing away the pavement and forming ruts on the pavement surface,” according to the bill. Damage to asphalt and concrete pavement on state highways due to studded tire use is estimated at twenty million dollars to twenty-nine million dollars per year.The legislature also intends to phase out the use of studded tires by prohibiting the sale and eventually the use of studded tires in Washington. 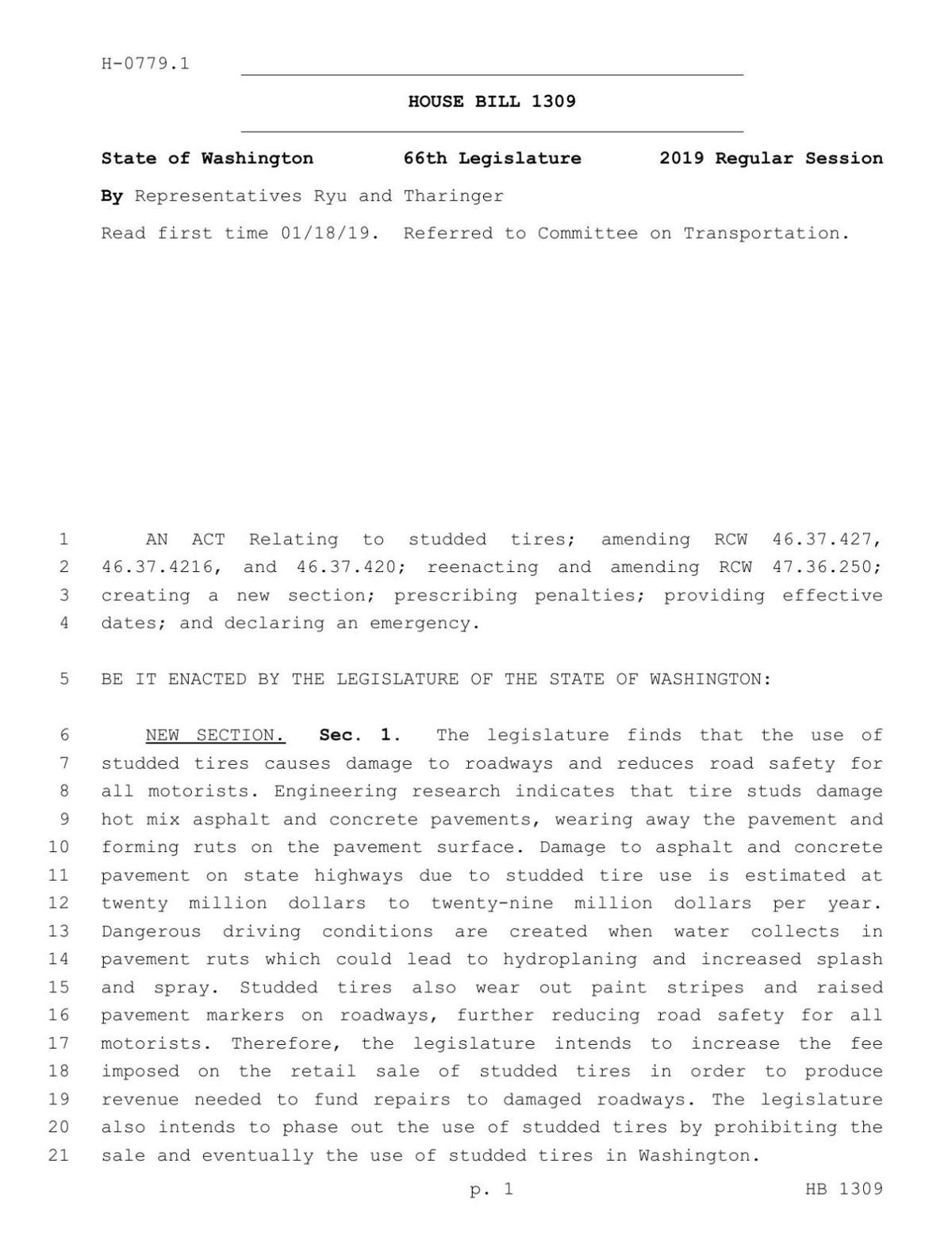 When the politicians ban "black ice"......then, they can ban studded tires. "Safety First"......and was there a study to determine where in the state the most studded tires are sold ?....I bet it is east of the Cascades....where will most of the money collected go?....yep....the west side. How many more accidents and loss of life this bill will cause?......Think about it. How many people are living paycheck to paycheck.....trying to make ends meet and then the people have to decide....pay for studs or keep food on the table, pay utility bills to stay warm where they live vs. the safety of thier loved ones....T h i n k.