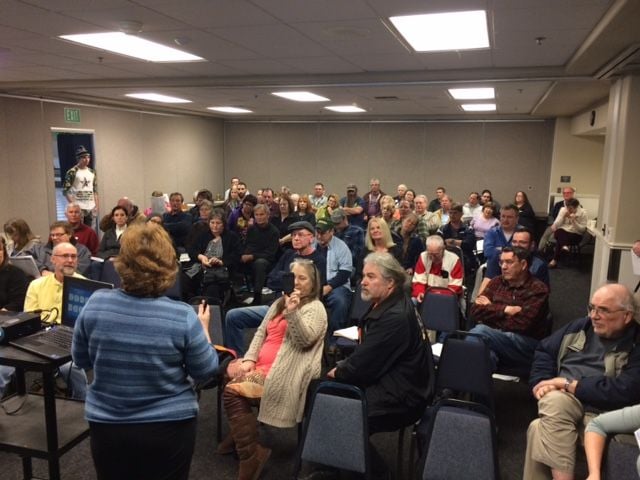 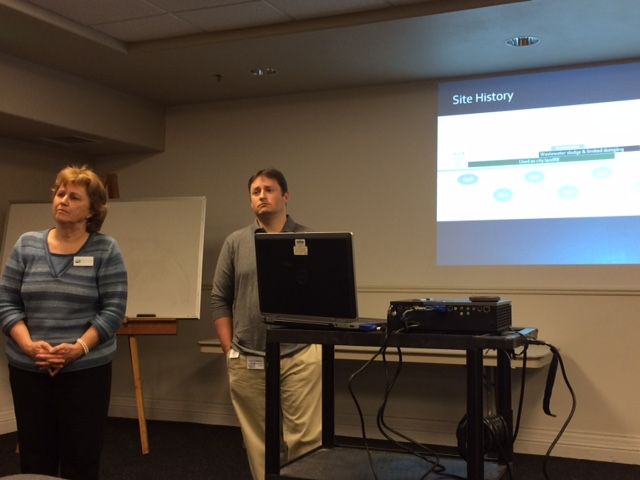 Rebecca Lawson and Jason Landskron, with the state Department of Ecology, who are leading the investigation into ground pollution at Shelton’s C Street Landfill; audience attending the informational meeting in Shelton Civic Center.

Rebecca Lawson and Jason Landskron, with the state Department of Ecology, who are leading the investigation into ground pollution at Shelton’s C Street Landfill; audience attending the informational meeting in Shelton Civic Center.

SHELTON – It could take more than two years before a clean-up of the C Street Landfill site begins. “We could get the clean-up in three, four, five years, but it all depends on what we find,” said Jason Landskron, state Department of Ecology cleanup project manager for the C Street site, on Tuesday night.

If contamination is found outside of the 16.7-acre landfill boundaries, that would add time to the already complicated data-gathering process, he said.

Landskron said the actual clean-up is always the shorter process. He said the site could be capped with thick plastic and left intact if no toxins are found outside the site’s boundaries and there is no impact to the aquifer.

The meeting at Shelton Civic Center was one of the first steps in exploring the extent and types of contamination at the site, state officials said. It is intended to help in planning cleanup options that protect human health and the environment, they said.

The state Department of Ecology completed an assessment of the site in 2014, which led to the landfill being selected for a cleanup.

The comment period for the Ecology project’s order and public participation plan started Monday, and continues until March 9.

Written public comments were accepted at the meeting and can be sent to Landskron at Jason.landskron@ecy.wa.gov, or by mail at: Jason Landskron, Department of Ecology, Toxics Cleanup Program-SWRO, P.O. Box 47775, Olympia, WA 98504-7775.

Lawson told the audience that a public hearing could later be conducted to allow Shelton residents to comment on their concerns.

Ecology’s order would be released after state officials conduct the study in about two years, under a proposed schedule, according to Landskron.

The findings would include a legally binding document requiring the City of Shelton to study the contamination, and to plan cleanup options.

A 1986 study by the Environmental Protection Agency confirmed the presence of dioxins at the C Street site.

Answering audience questioning, Landskron said dioxin particles bind to soil and air particles and do not leach into the aquifer.

Owned and operated by the City of Shelton, the C Street Dump, also known as the Shelton Landfill, began operations around 1928 at the site of a former gravel pit.

Between 1976 and 1981, wastewater sludge containing ash from the Simpson Shelton mill was dumped on the site, according to information from the city. The ash was sampled and tested by the federal Environmental Protection Agency and a1986 EPA report found the dioxin risk exposure from the ash to be low, city officials stated.

The C Street Dump is unlined and operated as an unpermitted open dump, receiving and burning industrial and municipal waste, including sewage sludge, bag-house ash, industrial and military chemicals, and residential waste until at least 1986, Waste Action Project representatives stated.

Waste Action Project is part of The Northwest Toxic Communities Coalition. It filed a lawsuit in December against the City of Shelton, stating it has taken too long to clean up the dump, also known as the Shelton Landfill.

Will Durham, Shelton resident and member of the Waste Action Project, attended the meeting and asked questions about the proposed timeline. He offered Landskron information the group researched and Landskron said he had already reviewed it and used it in his presentation.

“We don’t know what the timeline was before but they took 15 years (for an order) and did nothing,” Durham said. “So I have great concern that multiple events can extend the process.”

CStThat includes a lack of funding, he said.

Lawson explained that revenues to fund the Model Toxics Control Act is based on the price of a barrel of oil. Because oil prices are so low, so goes state funding.

She said state lawmakers are looking at alternative legislation that would rethink the formula.

Durham also voiced concerns about the time it take if other toxins are found on the site.

“There are a lot of issues going on,” Durham said.

Waste Action Project wants to make sure the City of Shelton fulfills its obligation to clean the dump and protect the citizens and their children from further exposure to toxins from the landfill.

Waste Action Project is a nonprofit, public interest, environmental advocacy organization with members concerned about the health and safety of their communities, environment, watershed, and sea life, representatives state.

A number of other people attending the meeting asked about Simpson Timber Company’s liability in the clean-up for allegedly pumping toxic ash into the city sewer system, sludge of which the city moved from the water treatment plant to the landfill site.

Lawson said the city was ultimately responsible for the clean-up and any additional liability would have to be backed by research.

The dump site has not been properly closed or covered violating numerous state and federal solid and hazardous waste regulations enacted under the Resource Conservation and Recovery Act, the lawsuit states.

Toxic substances at the site include dioxins, furans, solvents, PCBs, acetone, petroleum products, tributyltin, pesticides, semi-volatile organic compounds and wood waste chemicals and metals, according to the lawsuit. That includes aluminum, arsenic, cadmium, chromium, copper, lead, mercury and zinc that contaminate the soil and possibly the groundwater at the dump, which is located in a critical aquifer recharge area, the lawsuit states.

To ensure proper closure of the toxic site, Waste Action Project filed a civil action for a declaratory and injunctive relief, the imposition of civil penalties, and the award of costs and fees. The action was filed in Federal District Court for the Western District of Washington one year after Waste Action Project notified the city of its intent to sue to enforce closure regulations applicable to the C Street Landfill.

The Washington State Department of Ecology and the City of Shelton have recently begun a process for assessing the site and for remediation under the State Model Toxics Control Act.

“However, this process is notoriously slow, and both the city and Ecology have failed to acknowledge an accurate history of the site and closure requirements,” the lawsuit states.

The landfill was used by city residents and people living in the surrounding area from 1950 to 1974. In 1975 the city began using the site for limited dumping of road sweepings, pruning debris and sludge from the wastewater treatment plant.

The Shelton City Commission, under an order from Ecology, tentatively approved the feasibility study of the C Street landfill site in October.

The council’s action officially closed the 16.7 acre landfill, which the Department of Ecology required.

City of Shelton Public Works Director Greg Clark said the study would involve determining just how big the landfill is and whether contaminants are migrating off site.

The feasibility study contract, which is to be paid for through a $215,000 state Ecology grant, was awarded to Bellevue-based Stantec consultants. The city is required to pay 25 percent in match funding.