MATTAWA - Moses Lake police Capt. and now former Mattawa interim police Chief Mike Williams says the city is “repeating the same mistakes” that have led to problems with its police chiefs for over two decades.

Williams resigned as interim chief last week, staying in the position two months longer than anticipated as the process to find a permanent chief continued. 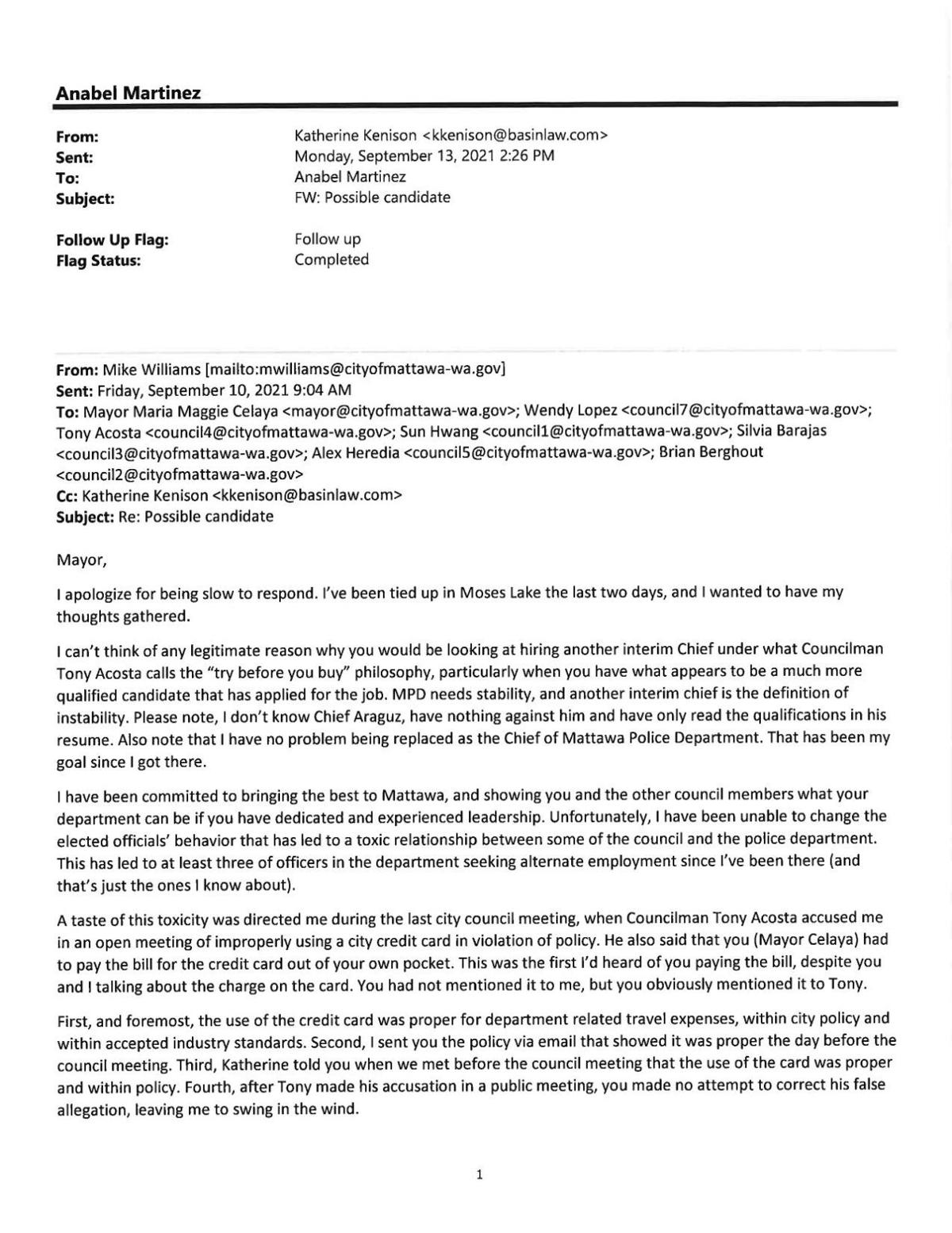 “As far as the search for a chief, you are repeating the same mistakes and cutting the same corners that have led to problem/unqualified chiefs in Mattawa over the last 25 years,” Williams wrote in his resignation letter to Mattawa Mayor Maggie Celaya. “This department will never take the next step forward in professionalism until you hire a high quality and experienced chief, and the council works with that chief to improve the agency. I volunteered to come in for three months to use my experience to stabilize your department and assist in the hiring of a permanent chief. I have stayed two months longer than I said I would, in the hope that I would be able to be a part of the change that Mattawa needs. However, every step of the way in the hiring process of the new chief, you have disregarded my advice and I don’t believe this time will be any different, as you have already entered negotiations with the city of Granger. In good conscience, I can’t be a part of this hiring process when the focus is not on hiring the best possible candidate.”

Williams wrote that the city is looking to hire another interim chief “under what Councilman Tony Acosta calls the ‘try before you buy’ philosophy.” The city appears to be looking at Granger police Chief Steve Araguz for an interim role in Mattawa.

“MPD needs stability, and another interim chief is the definition of instability,” Williams stated, adding the city has received interest in the permanent chief position from a “much more qualified” candidate.

“I have been committed to bringing the best to Mattawa, and showing you and the other council members what your department can be if you have dedicated and experienced leadership,” Williams wrote. “Unfortunately, I have been unable to change the elected officials’ behavior that has led to a toxic relationship between some of the council and the police department. This has led to at least three of the officers in the department seeking alternative employment since I’ve been there…”

Williams also gave an example of what he says is a “taste of this toxicity” within the city council, as Councilman Tony Acosta accused Williams, during a public city council meeting, of improperly using a credit card.

“First, and foremost, the use of the credit card was proper for department related travel expenses, within city policy and within accepted industry standards,” Williams wrote. “Second, I sent you (the mayor) the policy via email that showed it was proper the day before before the council meeting. Third, (the city attorney) told you when we met before the council meeting that the use of the credit card was proper and within policy. Fourth, after (Tony Acosta) made his accusation in a public meeting, you made no attempt to correct his false allegation, leaving me to swing in the wind. Making completely false allegations of wrongdoings by a police officer is a great way to ruin a career. I don’t know what (Tony Acosta’s) intentions were, but this was certainly bush league and unprofessional. (Tony Acosta) has my cell phone number, has called me numerous times and could have asked me about it at any time. In 26 years in law enforcement, I have never had an accusation of improper conduct like that made about me.”

Williams ended his resignation letter stating he would be available for the police department with the budget process and to assist a new chief with the transition when another candidate is hired.